The weekend before last saw us heading up (further) north to catch a couple of concerts by Cahalen Morrison & Eli West. As mentioned in a recent blog of mine, they have been touring across Scotland along with a couple of dates in northern England and finishing up with a handful of Irish gigs. We booked ourselves a B&B in the handsome seaside village of Coldingham, just north of Berwick, and

bought tickets for their Friday night gig in the village hall. This wonderful old building is obviously getting a new lease of life with modern theatre-style seating for 100 and a varied programme of events. After a quick visit to nearby St Abbs and a fish and chip supper in the pub next door, we settled in to our front row seats for an intimate evening of music.

The show was opened by The Kilcawley Family. Featuring guitar, autoharp and harmonica, this young male/female duo delivered an interesting range of material with a mostly melancholy feel, including a couple of originals and their own interpretations of Old Joe Clark and Cherokee Shuffle. I was particularly impressed by Louiza’s soulful singing on Twelve Gates of the City and Damon’s lovely guitar picking throughout. They also showed their enterprising side by running a raffle to help finance their support slot – a sign of the times, I guess.

On to the main event, and it put a big smile on my face just to see Cahalen & Eli take the floor for their set. As I have said many times, these guys are the real deal. The amount of soul that they pack into their music, using two voices and a couple of stringed instruments…well, it does my heart good.  Between them they alternate between mandolin, guitar, banjo and bouzouki, delivering tasteful, rhythmic 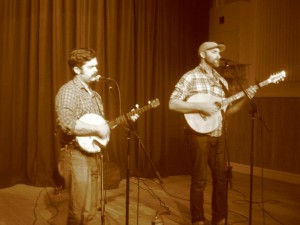 picking on every one. And the singing….the singing is what makes them extra, extra special. Cahalen has one of my favourite ever voices; soulful, earthy, out there. Eli’s rich, pure voice complements Cahalen’s perfectly in his skilful harmony singing and also shines in its own right on those songs where he takes the lead (Loretta, Church Street Blues). Cahalen’s original songs are of stunning quality, many being evocative of the American West (All I Can Do) or of the sea (Fleeting Like the Days), or indeed both! The lads also have the happy knack of being great interpreters of traditional song as well as making beautiful covers of other artists’ material. Their jaunty version of Loretta by Townes van Zandt was a gorgeous case in point.

The set as a whole was a satisfying mix of songs from both first and second albums, as well as a few interesting additions. I loved Eli’s sweet version of the gospel standard Green Pastures, and new song James Is Out was catchy and quirky, complete with some bouncy banjo picking. Fleeting Like the Days is just a moody masterpiece of a song, with Eli’s gorgeous guitar breaks the icing on the cake. The opening song from Our Lady of the Tall Trees, Stone to Sand, is also one of my favourites. We even got a one-time-only dedication from the stage, when the lads premiered another corking new song, Fiddlehead Fern. This started life in our dining room when they stayed with us for a couple of days during their last tour. Immortality at last!

After a walk on beautiful Coldingham Sands next morning, we continued our mini tour odyssey with a great cross-country run to Kendal. We checked into our room at the hostel, conveniently located next door to Saturday’s venue, the Brewery Arts Centre.

This looks like a great facility for the town, with a cinema and art gallery as well as a packed programme of live events. After a bite to eat in the lively bar, we settled down in the characterful surroundings of the Malt Room for our second helping of C&E goodness. They really were on top form, with an appreciative and attentive audience of at least 150, by my reckoning, hanging on every word and note. Cahalen and Eli seemed to be enjoying themselves too – I love to see the great interplay between the pair on stage and Eli smiling that heartbreaker smile! Handsome devil, young Mr West. There was also a fair amount of banter going on, mostly based around Cahalen’s sartorial choices that evening – he is henceforth to be known as Mr Double Denim.

They brought us another fantastic mix of songs and tunes, with a particularly intense rendition of All I Can Do from new album Our Lady of the Tall Trees and a driving version of On God’s Rocky Shore. As usual, their a capella rendition of My Bloody Heart went down a treat. There was also a glorious chunk of old-time country in the form of the Larry Sparks song Natural Thing to Do. All 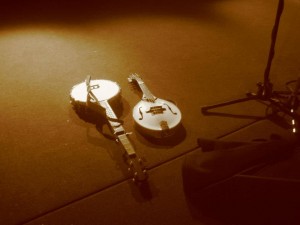 in all a wondrous cornucopia of melancholy and longing, humour and joy, making the foot tap and the soul soar. I can’t wait for the road to bring them back to us again, and in the meantime I have my precious copy of the new album ready to take up residence in the player.

You can listen to (and buy) Cahalen Morrison & Eli West’s music at their Bandcamp site here. Their website has more information and tour dates – keep an eye out for their return to the UK later in the year!